End of the week 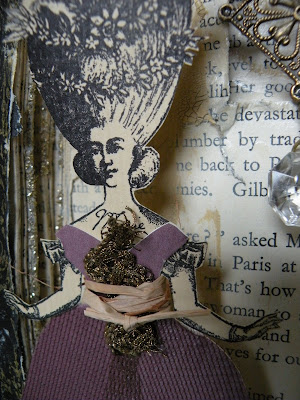 I don't really seem to have achieved much this week, the majority of my time has been taken up by visitor's days in both the kindergarten and school. This morning I spent over an hour looking for the phone which I eventually found in my daughter's craft cupboard, the worst part is I put it there myself while I was looking for a bit of cork to attach the lovely Marie, suffice is to say I'm pleased it's the last day of long week. Anyway, I re-stamped Marie and cut a dress out of an old paper bag from a French shop, I heard her muttering that it's not nearly posh enough but I'm afraid it'll have to do. After the orange hair incident I've decided to just leave her alone. 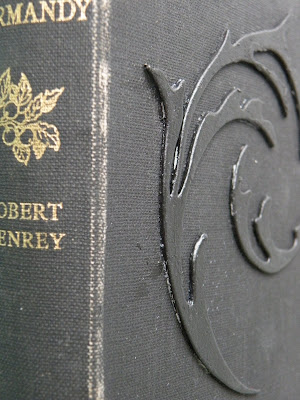 I attached several Grungeboard elements to the front, I think I probably should have done a bit more than just paint them black but nevertheless it's quite an interesting material to work with. I've had several goes at photographing the whole cover but have given up, big storms are sweeping in here, the light is terrible and everything I photograph ends up either shiny or white 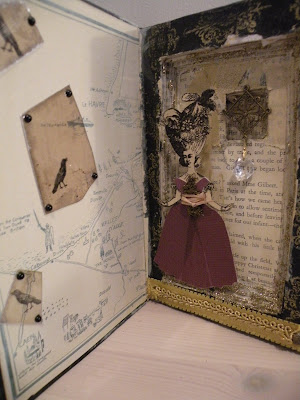 In lieu of a suitable beau for Madame to look at I stamped some crows onto Mica and glued them on with a bit of Diamond Glaze. 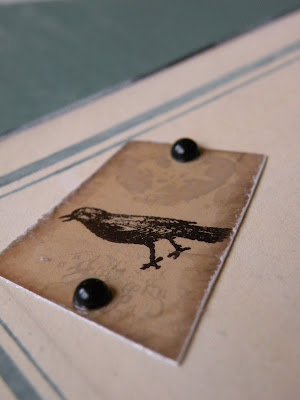 Poor old Herr Deck's eyebrows nearly went out the top of his head when I said I wanted to chop the tops of some flat headed nails, apparently they really are as hard as nails. I told him I'd already managed to get the tops off the upholstory tacks and he assured me the nails would be twice as difficult so I settled for some half beads, not quite the look I was after but at least they're on. Off to eat a tub of Ben & Jerry's and watch mindless telly...

oooooo Marie looks charming, such a fun post M, from beginning to end!!! This book really inspires me!!!

oh and brilliant stamping on the mica (I've just gotten a load of it), your crows look so sharp!

What a wonderful book!

Great idea to stamp on the mica. Is the image of Marie a rubber stamp too? i would love to add her to my collection (3000 or more!)of rubber stamps.
robin