I started the cover of my junk journal this morning, I've decided to make it with the family hamster in mind, she passed to the other side mid-nut during the recent holidays. I woke up last week to find her slumped in her food bowl, but as I said to the children she wasn't getting any younger and at least she went doing what she liked best, eating! Now we have a glut of cardboard boxes because of course they were the very thing I used to put in her cage, she was quite a character and is very much missed. 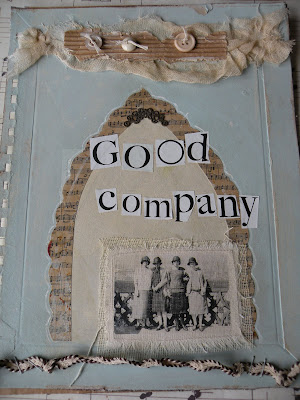 I'm thrilled with the colour and the way this card came up, I was regretting not sloshing a bit of Gesso on it first as it absorbed a lot of the blue, but in actual fact after I sanded it the brown underneath came through nicely and compliments what's happening above. 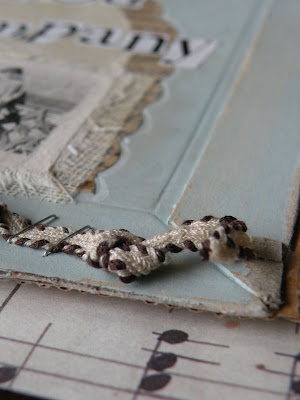 Carole, do you recognise the Muslin?? 'klein aber fein' as they say here 'small but beautiful' love it! 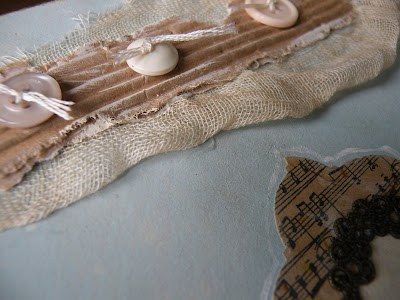 I originally transferred this image from a postcard for the recent 'friends' tag swap but managed to destroy one of the gals in the process and having run out of time I went for another idea. I decided to use it on the cover as I think the photo and the colours fit the sentiment quite well. 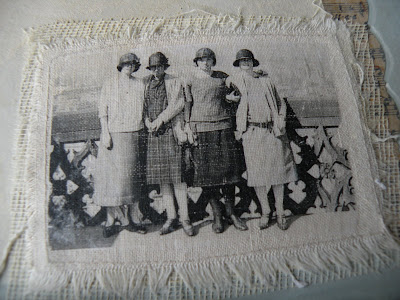 Great cover! Gives you all the right feelings! Perfect colours!!

Hey amazing! I love it, and all that fabric in there too! What method did you use to do the transfer?

I'm sorry...but I had to laugh about mid-nut! Glad I wasn't one of the gals destroyed.... love this piece. Love it, love it, love it!

ooo sorry about your hamster, hope the children are dealing with that OK

Love the way you transform cardboard,that blue is heavenly, with such great touches

You make me want to get busy on a "real" junk journal LOL!

There are no mistakes btw, your friends tags turned into something SO fantastic and so you!

This is an interesting project. I will follow closely what you are doing in order to do it myself one of these days (is this copyright infringement? - I don't hope so).
Sorry about your hamster. These are cute creatures. I had a pair of them as a kid and loved them very much. They got rather old for hamsters, and when one of them died the other one followed three days later.

What a picture! I am talking about the hamster's death. heehee Ours rarely died of old age. Two died from a child's excited sqeeeeeze. Both required mercy killing to relieve their pain. DH had to do it- I couldn't.

Now your junk journal does not look particularly junky from the cover. Maybe it should be a "junque" journal. Quite gorgeous!

This cover is great !