A while ago my blogging buddy Patty posted about altering some cutlery here. I decided to put in a bit of practice for our next QB5 junk swap and had a go! I wasn't entirely successful but nevertheless it was great fun! The first problem I encountered was with the hammer, I used one with a small head which effectively dented the spoon rather than flattening it, and once the dents were in they were quite difficult to remove. 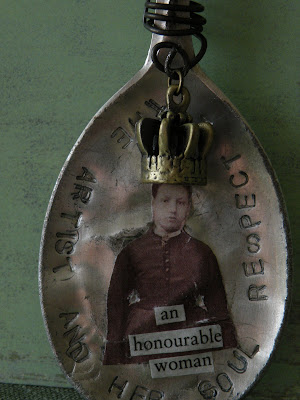 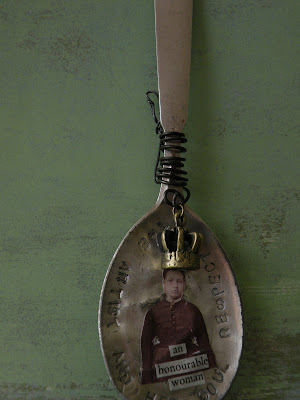 I wired a crown to the handle as I thought my gal needed a bit of fancy headgear and it covers up the letter 'T' which is both in the wrong place and upside down! As a hidden bonus it now makes a wonderful sound against the spoon! ah...the joy of mistakes! 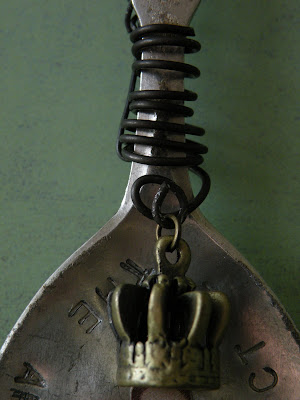 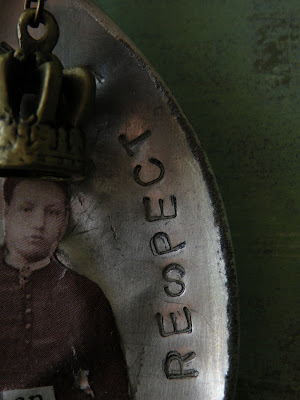 It is a lot harder than it looks when Patty does it. I have come to believe the softness of the spoon has something to do with it. Your attempt is great, and I love it when people show their thought process, too.

I love it - what type of letters did you buy to do this??? I would love to try it!
cheers, dana

WOW Margaret your spoon is gorgeous and I love the the message on it, great work.
Anni

Oh Margaret I adore what you've created...when you stamp into metal you really go for it!!!
I must share this with Mr Magpie ... he will be very impressed and inspired!

A really fabulous piece ... there really are no mistakes ... are there!
oxo

Well....good grief! As if you needed my help! This is OUTSTANDING!

Wonderful mistakes! Love this so much.

This is amazing!
Like Dana, my question is what letters did you use?
How you've managed to do this in the limited space of the spoon - and have them so uniform is incredible.
Trés magnifique!!
PS I'm so glad you enjoyed my canal trip!
Take care

The wonky letters totally make it charming! Wonderful spooness.
It could be your "signature" artist identifier. (I made that up but it sounds plausible.) You sideways "s" could be your SAI (look there are even initials for it now! It must be proper!)
Hope you can source lots more spoons (SLMS) to play with :-)
Gini
xx

This looks great. So interesting. I think its like cooking when you critisize your food no-one else really notices but its a great process to perfect your art.

Hi Margaret! I love your spoon necklace, it is so cool. Great altering! Thanks for stopping by. Take care, Riki

Mistakes are just another way of design development, lol. Love it and your honesty in letting us in on the little troubles you had making it!

Fabulous ! I LOVE the crown. I think back to front letters adds to the charm !

Oh, Margaret! I love your altered spoon!
Wish my arty mistakes were as awesome as yours!!!
I'm adding an 'old' spoon to a wall-hanging that I'm making at the moment, Mmmm...wishing I had some alpha metal stamps now!! - ...those little stamped letters are so charming!

Miss M., you could send me one of these any day of the week and I wouldn't complain! I think your mistakes MADE this piece! I like the sideways "s"!

I love Patty's cutlery and your is also amazing!!!
There is no mistakes for me:))
absolutely lovely!!:))

I think it looks great! Mistakes are okay...at least you didn't use one four letter word I can think of!
Angela
PS I just saw Cindy Adkins' October dress and she linked to you..I think the dresses are awesome. Is is too late to be involved?

I think it is wonderful!

I think this project turned out great! I've always wanted to try something like this. I've got the metal letter stamps. All I need to do is just start1
ox
jeanne