Sometimes I wonder what would happen if I did the artwork I actually planned to do instead of getting sidetracked?? This morning I had thought I'd like to do a bit of a Spring thing given that green shoots and buds are in rather short supply here at the moment, we still have snow, mutter mutter... I discovered some German Easter scrap I picked up last year in the local supermarket and that's when the distraction began 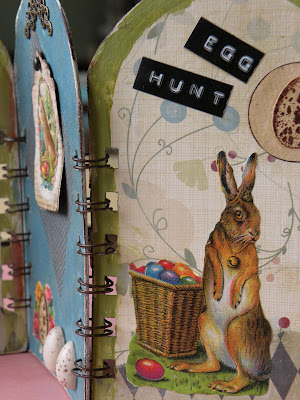 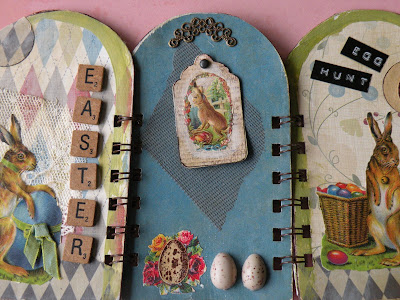 I bought these plastic eggs in the local DIY store, yes Herr Deck you CAN cut them in half if you really put your mind to it. They could do with a bit of a sand and some paint but I'll leave these particular ones alone, promise! 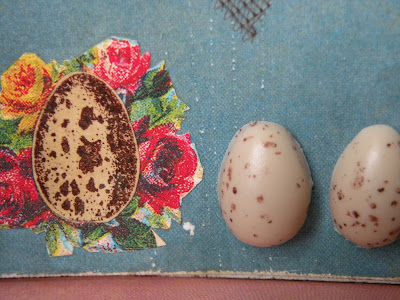 Surprisingly I had enough scrabble tiles to spell the word Easter and now I have a piece of work finished well ahead of time, unlike Valentine's Day which kind of passed me by. 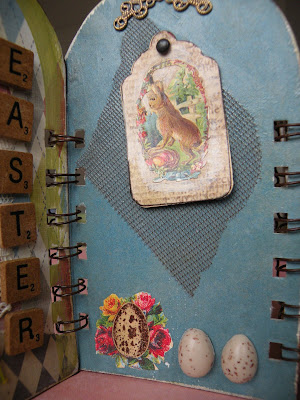 CLEVER GIRL! Great use for your Zutter Cutter! I love your mini Easter screen! One would hope LINDA would take up the challenge and pull hers out!

Oh M, it really puts me in the mood....for spring and Easter! Wonderful, I'm with you on getting a head start. Christmas passed me by this year in the creative department!
Always inspiring and fun to visit, so glad you got side tracked...it's a good thing :)

Oh wow....persecution in the Comments Section... I cannot escape anywhere. rofl I do love your "screen". You are so productive. I have to leave town for 24 hours. (not a legal issue...hahaha) Maaaaaaybe when I get back I'll open the zutter box.

Glad to know you can cut the eggs in half, I have been wanting to, but haven't yet...thanks for giving me the go ahead! LOL

how lovely, im glad you got sidetracked! jenxo

I've spent a happy time browsing through your blog. Your humour makes me laugh, your tutorials are inspirational and your spontaneity in your approach to your work is truly motivating. I LOVE IT!

this is very sweet!

Yes, I've already left a comment, but I just HAD to stop by again for a visit. I can't stay away for long. This is my 3rd time here today-- like your post is going to change within a 3 hour period on a weekend! I am hopeless.

Something I have been meaning to ask... Your name is neither Alice nor Camilla, so why those names for your blog?