My son bought this little fellow with his pocket money on the weekend. At the time I had a vague feeling I should've been pointing him in the direction of something else as with a slight push on the Edelweiss he whistles (to get your attention) then begins to sing, well yodel actually, again and again and again... I rescued the poor thing from under J in the early hours of the morning after being woken by it's frantic yodelling, J was none the wiser!! Last night I said to DH 'what's that animal J bought?' 'it's a ..... isn't it?' 'a what?' 'a.......' blank look, 'what's that in English then?' 'dunno, a ......?' 'is it?' and so on until I finally looked it up in my dictionary and well, was none the wiser. This morning I Googled it and have just had that special 'aha' moment. 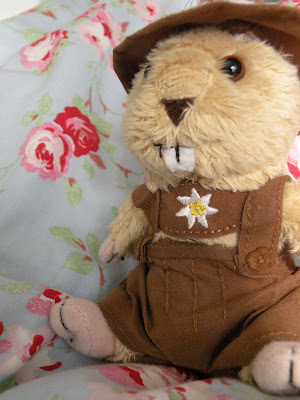 So here's the thing, I've decided to clelebrate the start of Spring (it's snowing AGAIN!) by having a giveaway, 5 sheets of assorted German scrap including the bunnies from the screen, and various flowery/ heart shapes. To be in to win leave me a comment by midnight (my time) Friday 27th March, including your guess as to what this animal is by completing the following line, 'this is a..........' it's irrelevant if you guess correctly or not, it's the taking part that matters! (my tribute to mothering Sunday) 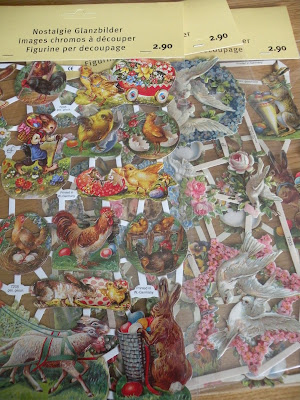 It is either a beaver or a woodchuck! How funny that he yodels....It made me laugh to imagine hearing that in the night. What a sound to wake up to! Please enter me in your fun giveaway too!

Yes I think it´s a beaver too !

Well, this is definitely a marmot aka chuck aka groundhog aka woodchuck! No beaver, sorry to say! These funny little fellows live in the Alps (therefor the Edelweiß) in huge families. There are always several sentinels when they are outside, and if you come too near the whistle and - whoosh - all of them vanish.
By the way, I would love to win!

This is a woodchuck (looks like anyway) that yodels Edelweiss....be still my heart, how cute is that ;)
Such a lovely giveaway M, thank you for the chance to be a lucky winner!

Now this looks like a chipmonk. However It could be a beaver, and I don't know what a woodchuck is!! lol
(but to your son it could be anything he wants it to be!!)
p.s. does it have a battery in it? ;)

i would say woodchuck too
love that it yodels edelweiss-i love that song :)
please enter me in your great giveaway
many thanks for sharing
enoy your day
tabby :)

I can't imagine WHY there would be beavers in the Alps (any rivers or pond to dam?) so I would definitely guess a groundhog or woodchuck. Of course WHY have him yodeling accept to sell toys to kids and drive their parents batty?!

I'm with Mel- if the rodent has batteries maybe one could become dislodged by "accident" and then tell your son that you cannot find replacements because they are a special, rare battery not easily found at your local store. That occasionally works for me. :) Your son will be onto the next thing in no time and forget about his beloved yodeling groundhog. And you will, once again, sleep peacefully through the night

Woodchuck would be my guess, too. I've never seen a yodeling woodchuck...how cute!!
That is sure some beautiful German scrap that you are giving away!!

I'll just go with beaver. How did I miss this post the other day? I want this giveaway. I need it TODAY tho!!! ha!