I don't know about you but often I start something and I either don't know where it's heading or on the flipside it just takes on a life of it's own. This morning I got up and looked at Messrs Butterby and Wood and came to the conclusion that they needed a bit of colour in their lives, bring on the blue! 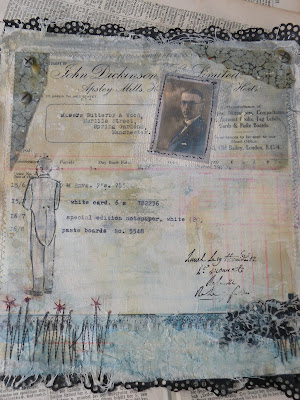 I bought a really cool 'signature' stamp from Hero recently, I can see myself using this one a lot 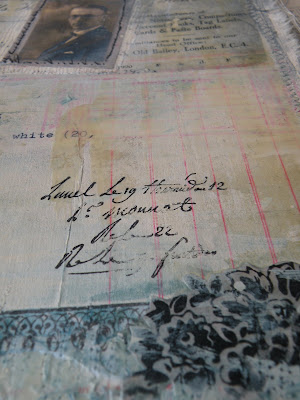 I repaired the holes from the seismic activity with a bit of texture gel, I need to get some white gel as I only have translucent and it took quite a bit to cover the damage. I also used my recently purchased needlecase and needles from Kiwi Carole http://kiwicarole.blogspot.com/ and after finding a YouTube vid on French Knots had a go. 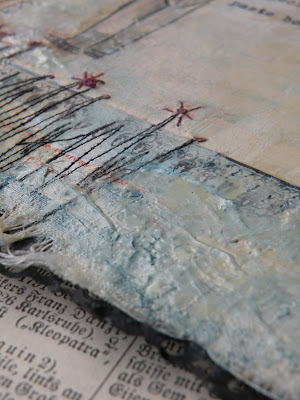 I added one or two items to the invoice, buying a cranky old Hermes typewriter has it's merits afterall. Then to finish, a layer of wax, I so love that whole 3D effect, paint splotches and all 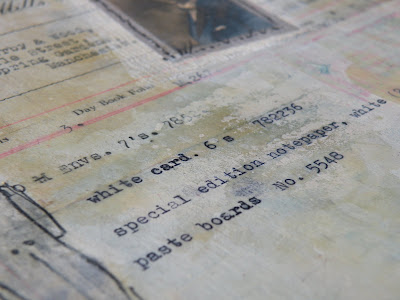 A lovely comment on the last post from Mixed Media Martyr, as kids we used to stand in front of the Seismograph in the Museum and jump to get it to make a zig zag, strictly forbidden but great fun. I also spent my library training in Karori which was one of the few towns in NZ that didn't sell alcohol (don't know if it does now?) and was right on a fault line, what a combination!! There was many a time we had to slide under our desks or go and stand in a doorway.
Nathalie, the jars are Italian, apparently designed to hold fabulous homecooked sauces ready for Al Fresco dining however in this house they only ever contain chocolate biscuits!

Yep, Butterby & Wood needed some color, and you were nice enough to provide them with some. It's excellent.
Happy days,
Joanie

I didn't think you could improve on the Mssrs, but indeed what you've done is brilliant M! Adding beeswax must give it such a fine texture and interest....fabulous creation this is (blue and french knots two of my fav things)! These guys really got you going. I must get my dh to install my typewriter ribbon....I am hopeless at those sorts of things it seems, I try.....but?

I need to find a typewriter ribbon for my old Royal!!! This piece is awesome, Margaret! I thought it was great before.... and I love that signature stamp! Something else to shop for. I am once again insprired by you.

The crankier the type writer the better, I say! I have to POUND the keys on one of mine to get it to type! Great for getting aggression out!

This piece becomes more wonderful by the day. I wonder is it done YET? I'll be stopping by again to see!

Your notions jars are sublime. Even more so, knowing their humble origins!

Love the shades of blue! It looks good with his jacket!!

I really do think the best pieces of work unfold naturally, just as this has done...I love it!

This is going to be a fascinating piece of mixed media art! And that signature stamp is really cool. You solved the problem with the seismic activity - sometimes errors just help us to get even more creative, don't they?

This is looking amazing. Thanks for the close up shots --- the details here are great!

What a wonderful project, love every detail you´ve added!

Lovely Work!
Blessings, peace, and love to you,
Tonya