It's all about the box

I bought a couple of wooden boxes last week in a shop I really shouldn't have been in to begin with, the potential to spend vast sums of money was simply overwhelming!! but I'll tell you about that another time... I covered one of the boxes (40 x 10) with some old book pages and a splash of acrylic. I lined up a row of wooden cotton reels and eventually found a stick to thread them on. 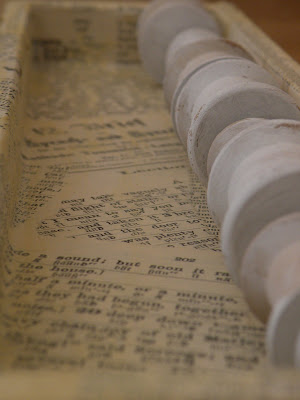 I originally thought I'd write on the reels and stick photos in the background but after covering them with Cavallini paper the whole piece seems to be heading in another yet to be decided direction! In the meantime I've hammered a few tacks around the edges and added a bit of wire 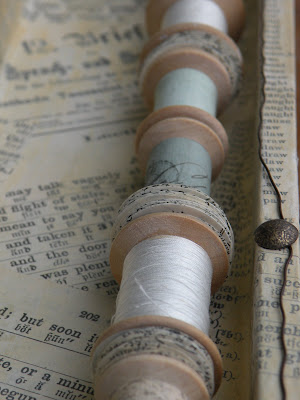 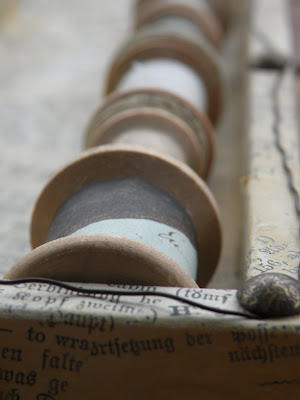 I punched out some paper 'washers' to thread in between, a variation on a Christmas Tree idea by Martha Deavers in Sommerset Life Dec 09. 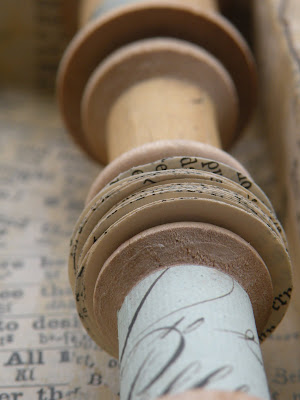 catching up with your three last posts....fabulous ! Love the party hat & bag and the box looks really interesting

well this looks brilliant, altho I think to see more ;)
great use of the wooden spool collections we all have ... you've been busy ... fueled by candy corn I bet :)
oxo

I love your close up photos, BUT, I can't see ENOUGH of this piece!!!!! Does it still need finishing or are you being a terrible tease with your blog followers?

The textures and materials are all so wonderful.

I'm lovin this! What in the world are you doing! I must see more...and very soon!